Automotive manufacturing in the UK hit its second-highest output in 17 years an SMMT study this month shows. The report highlighted that last year 1,671,166 vehicles rolled off production lines in the UK with exports remaining at a historically high level and down just -1.10% meaning 1.34m cars were shipped worldwide from the UK. 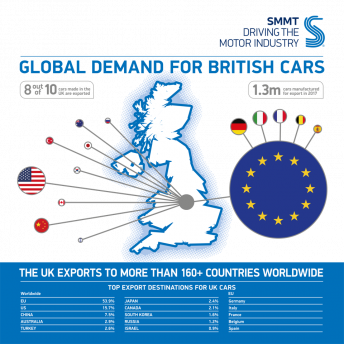 Overall the figures were brought down by a -9.80% decline in production output for the domestic market as the UK car buying market responded to declining business and economic confidence and general confusion on the government’s standpoint on diesel-engined vehicles.

The report continued that exports also fell at a rate of 1.10% but overseas demand for Britsh vehicles dominated production and accounted for 79.90% of the total car output – incidentally, the highest this has been for five years.

The EU continued its trend of recent years and remained the UK’s largest vehicle trading partner accounting for more than half of all exports at 53.90%. That said, the demand for British-built cars rose steadily in several other key markets, Japan (+25.40%), China (+19.70%), Canada (+19.70%) and the United States with an increase in demand of 7.00%.

Despite the generally positive news, figures are still 130,000 units below the mid-year forecast…

Driven by the lower than anticipated car demand in the domestic market, these latest output figures are well below the forecasts. This report has put a new spotlight on the importance of the government and industry working together to give the market the best possible chance of success and ensure the right conditions.

Generally, the UK has a fantastic international reputation as a centre for excellence in powertrain design and manufacturing which has gone a long way in helping to take engine production levels to record highs. Moreover, the UK-built engine demand continued to grow both here at home and overseas, overall output was up 6.90% at more than 2.7m units – 54.70% were destined for outside of the UK with the majority remaining in the EU. 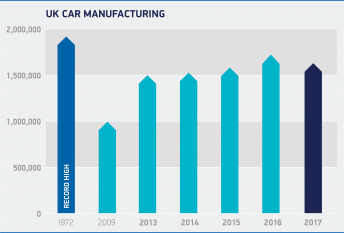 It’s no accident that the UK is seeing great success in worldwide sales of its home-manufactured engines as automotive manufacturing plants across the country have invested significantly in the production of high-tech, low-emission petrol and diesel engines as the market moves towards being generally more economically friendly. Throughout 2017 over 1 million diesel engines and 1.7 million petrol engines were built in Britain, securing a huge £8.5bn to the economy.

Mike Hawes, SMMT Chief Executive, concluded: “The UK automotive industry continues to produce cars that are in strong demand across the world and it’s encouraging to see growth in many markets.”

Here at Clarity Visual Management, we specialise in supporting some of the world’s largest car manufactures to ensure that UK automotive manufacturing remains strong. Working directly with some of the largest automotive manufacturers in the world, including the Toyota Motor Corporation & Jaguar Land Rover, and their top level suppliers; we have direct and extensive experience of adding real value to the automotive manufacturing sector with high-performing and engaging visual management. We also enjoy a special relationship with the Nissan Sunderland Plant where we participate in factory tours and in-depth workshop sessions with Nissan and other businesses looking to make Lean work in their organisations.

If you or your business could benefit from making Lean work through effective, engaging visual management then get in touch with Clarity – you can contact us here. 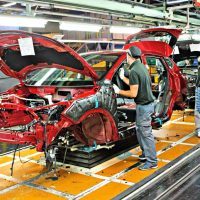 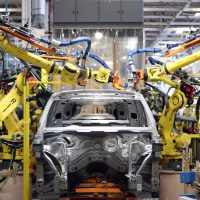 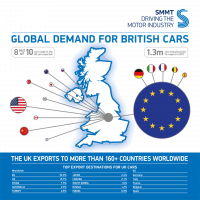 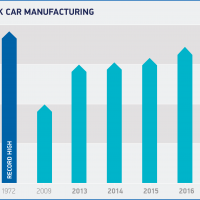