Manufacturer of the Year: McLaren Automotive

Manufacturer of the Year: McLaren Automotive

‘Manufacturer of the Year’ 2017 winner McLaren Automotive’s business ethics are to be innovative, creative and obsessive. The McLaren team are meticulous when it comes to planning a project and take extra care to ensure that every single element is considered. But, when the time comes to press the button and start moving, they are phenomenally quick… very much like the cars they manufacture! Of course, when McLaren talks about their creativity and obsession with being innovative they don’t mean purely cars – it’s every part of the business, the entire company and way that it’s run!

Alan Foster, McLaren Automotive’s Executive Director Infrastructure Projects, spoke to The Manufacturer about their successful night at the awards:

“To be honest, we are still revelling in the afterglow. It has spread like wildfire within the organisation – I’ve had heads of department and engineers from different areas of business coming up to me and going, “Can I have a look at the award?”. We get award after award for the vehicles that we produce, and we’re very proud of that, but to now get industry recognition at a national level from recognised bodies, and one of the primary leaders of the manufacturing industry – The Manufacturer, has great credibility for me.” 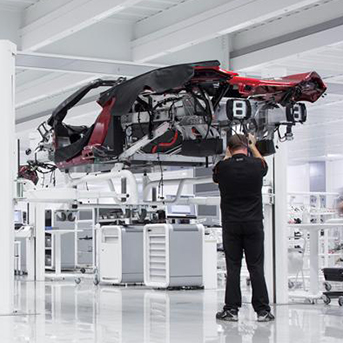 The winning team from McLaren described another key element to their success, “relentlessness”. The team were keen to point out that their mission is to do their best today, go and have a rest, get their balance, come back the next day and try to do something better. This way the whole machine, the whole creative process will continue to move forward in a way that benefits everyone. Alan Foster continued, “We’ve not lost sight of our obsession, innovation, relentlessness, and courage, but we have tempered it with elements from different people, harvesting the best of the best, and then sprinkling the fairy dust of McLaren over the top.”

Perhaps one key difference with McLaren’s manufacturing is the degree of personalisation available with their supercars; they are by no means cookie cutter and customer-ordered differences are a huge part of their manufacturing model – Alan Foster added, “we can tailor exactly what a customer wants. Since we started in 2011 we’ve produced close to 13 or 14,000 supercars, and genuinely, I don’t think we’ve made the same car twice.”

At Clarity, we’ve worked with McLaren Automotive to supply a range of quality visual management to drive staff engagement, help them to achieve their goals and make cost savings which would have otherwise been lost to waste. Our work with the automotive sector has seen us work directly with some of the largest manufacturers in the world and we’re the go-to experts when it comes to automotive visual management.

If you think that your organisation could benefit from the undoubtedly positive effects of visual management then Clarity Visual Management offer a bespoke consultancy service supported by effective, engaging visual management which is designed to sustain you on your Lean journey and ‘Make Lean Work‘ in your business.

Read the original interview from The Manufacturer here: https://goo.gl/sGcvgS