The History of Lean

The History of Lean

We can trace the history of Lean all the way back to the 1500’s! Flow Production can be seen in the methods of the Venetian Arsenal who introduced assembly lines when creating standardised boats moving through assembly stations. Read more and learn about Lean history.

We can continue to look through history for breakthrough moments in Lean – in the 1780’s, the French Army pioneered the concept of interchangeable parts in weaponry; this precursor is essential in high-volume flow production.

Moving ahead in the timeline, in 1902 Sakichi Toyoda developed a device to detect a broken thread in the loom; this technology then automatically stopped production when the cloth was defective. Toyoda refined his invention and soon it permitted machines to operate without the need for workers at all to watch each machine operating and allowed smaller workforces to oversee multiple machines at once.

In 1908 Henry Ford changed the world with his Model T. Introducing a truly modular car, Ford makes a huge leap in interchangeable parts through a standard gauging system used throughout his factory and through every supplier.

Ford continued to develop production and in 1913 at his Highland Park plant he pioneered Flow Production. Ford placed fabrication equipment in a process sequence which allowed the whole factory to operate at the rate of the final assembly line.

As Henry Ford continued to develop his production vision, he completes his Rouge complex and add product variety and introduces the term “Mass Production”. The flow of material complex is automated by miles of conveyors and is located to the relevant “process village”.

By 1937, and as Kiichiro Toyota establishes the Toyota Motor Company, he develops the idea for Just-In-Time (JIT) delivery of parts. Ahead of his time, the concept doesn’t take off due to logistical challenges. However, as the idea was developed throughout the manufacturing world by the 1950’s Taichi Ohno realises the concept for just-in-time delivery of parts.

In the 1960’s and under the leadership of Eiji Toyoda, the Toyota Motor Company created a management system with a new approach to leadership, problem-solving, production operations, supplier collaboration, product and process development and customer support.

Despite all this history, it wasn’t until 1987 that the word “Lean” was first introduced to describe and label the combination of methods pioneered by Toyota (above). John Krafcik, a researcher at the MIT International Motor Vehicle Program coined the label, applied to those methods and Lean is born.  At the same time, a host of writers and consultants take Lean across the world and promote Lean methods far and wide; outside of the Japanese automotive industry.

1990 – The Machine That Changed The World. Jim Womack, Dan Jones and Daniel Roos write an explanation of the methods pioneered by Toyota and labelled by Krafcik. The writers provide exhaustive evidence of the competitive superiority of the system.

Fast forward to today – companies around the world both in manufacturing and outside it are benefiting from the insights of Lean. Truly, adopting a Lean approach not only makes sense but is vital for companies wanting the best from their processes. Clarity Visual Management exists to facilitate and advise on our customer’s Lean programmes. We have helped countless companies from across the world all looking to make the most of their Lean programme, no matter which stage of the process they’re at. 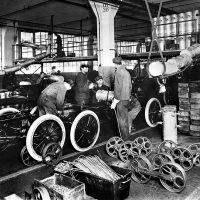 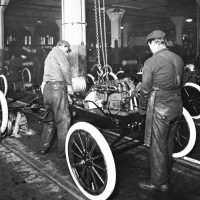 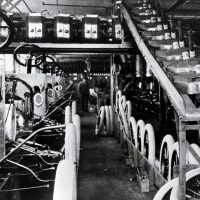